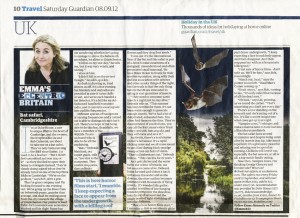 It was a Friday afternoon, like any other… Well, actually, it was nothing of the sort. Emma Kennedy arrived about 3.00pm on a Friday afternoon at the end of her first week on Celebrity Masterchef. You know what it’s like when you meet someone off the telly. There is a natural instinct to feel that somehow, one has known the person for years and thus able to say anything you would to an old mate. So, “you’ve gone blonder than when you recorded Masterchef” probably wasn’t the best opening gambit Rob could have offered. But, in typical fashion, Emma laughed loudly and coquettishly pointed out she had been in the sun a lot lately and anyway MC was recorded way back in February. Keen to know whether the evening ahead would be one of comiseration or celebration, we tried much probing questioning but Emma was clear that the outcome of the show - would she get through or not - was staying with her and we would have to wait and watch.

But why was Emma here at all? Well, her series Eccentric Britain sees her travelling the country sampling the oddest pastimes. Ace PR guru John Gordon-Saker (JGS) suggested she come to Cambridge for a Bat Safari on a Punt run by Scudamores Punt Co, and take in a stay at Duke House. And, who’d have thought it,  but she said yes!

So at 6.30pm with a couple of bottles of fizz and some nibbles we settled down to watch Emma do things to a duck breast that, frankly, there ought to be some sort of law against. But, we now know the full story of why she chose to cook something she had never previously attempted. Fact is she had little choice as all the ingredients  for her planned menu had come up on the Monday. But her amazing cooking during the week (and her aplomb when shouting “yes chef!”) was enough to see her through. My, how we cheered!! So, with a winner in tow, we set off for the river… The account of the trip can be found at the link or on the image so we won’t go through all that again here. Suffice to say that the post-punt dinner at Fitzbillies was a great laugh, with JGS joining in and on good form. The evening was topped off by Liz setting fire to her menu (pesky little table lights…) which wasn’t the most stylish way to impress, but somehow in keeping with what had been a most memorable Friday. A Friday that was, in fact, like no other!