At One With Cambridge

A Unique House In The Heart Of Cambridge

We Welcome All Visitors to our Beautiful City

We are delighted to be opening again on Friday 17 May and are now taking bookings  from this date. Please go to our booking page for availability. For your safety we will still be keeping COVID measures in place. Do get in touch if we can help with your booking.

We look forward to seeing you soon.

Nestling alongside Christ’s Pieces in the very heart of historic Cambridge, Duke House is a boutique B&B offering outstanding accommodation to suit all visitors to our beautiful city. » Your stay at Duke House » See press coverage

Our en-suite guest rooms have been tastefully and individually designed. Relax in our sitting room, enjoy a drink on the balcony or linger over coffee and papers in the breakfast room looking out onto the courtyard. » B&B guest rooms » Self-catering apartment » Read guests’ comments

All the city’s historic colleges and attractions are within just a few hundred metres. The Grand Arcade, Cambridge’s premier shopping venue, is within just three minutes walk. » See where we are » What to do in Cambridge » Cambridge photo gallery

“It would be hard to stay somewhere else knowing what Duke House has to offer.”

Duke House is in the Good Hotel Guide

“Close to the city’s historic colleges, this welcoming B&B is run on sustainable lines, with no compromise on comfort.”
» See our listing in the guide

The Times thinks we’re a cool place to stay! 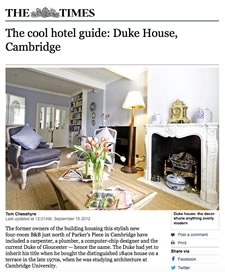 “Rooms at Duke House have an understated English elegance. Cambridge has a great little B&B”

We’re mentioned in magazines too! 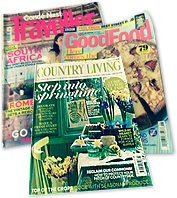 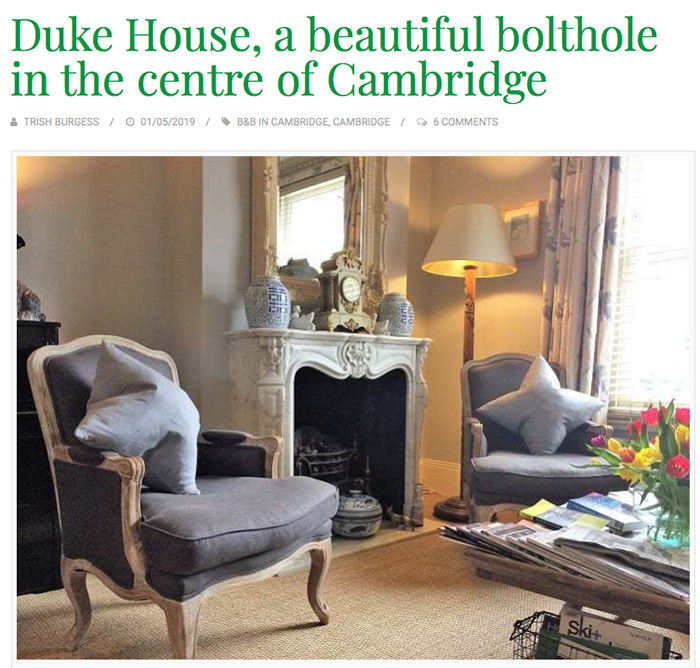 MUM’S GONE TO… Travel tales of an empty nester

Recently we had a review published on a travel website, below is an excerpt.

Duke House is an exquisite little B&B, just the sort of place the city has been crying out for. It’s located in a terrace in Victoria Street, in the heart of the city centre, just behind my alma mater. With five luxury bedrooms and one self-catering apartment, it’s a tiny oasis in the bustling city. You wouldn’t think you were only a short walk from the bus station or the Grand Arcade shopping centre.

It has a fascinating history. Built in 1860, it was used both privately and commercially during Victorian times. For much of the 20th century it was a decorating and plumbing business. It took a right royal turn in 1967 when HRH Prince Richard, Duke of Gloucester, bought the property. As a student of architecture at Magdalene College at the time, he saw the house as his project, making many alterations which gave the property its character today. In the lobby of the hotel there are photos from a more recent visit from the Duke in 2012 when he came to see how the current owners, Liz and Rob Cameron, had changed his former home into luxury B&B accommodation. He stayed, quite fortuitously, in the guest room named The Duke. 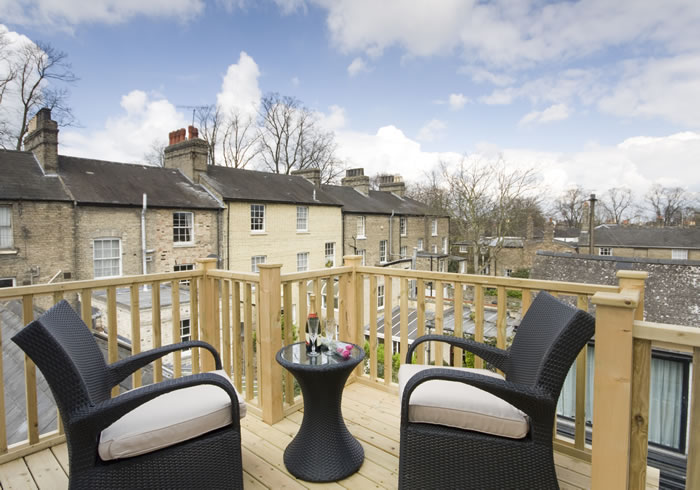 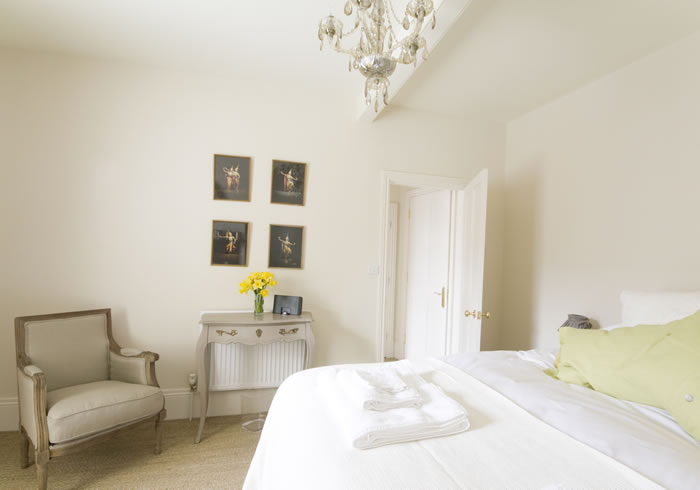 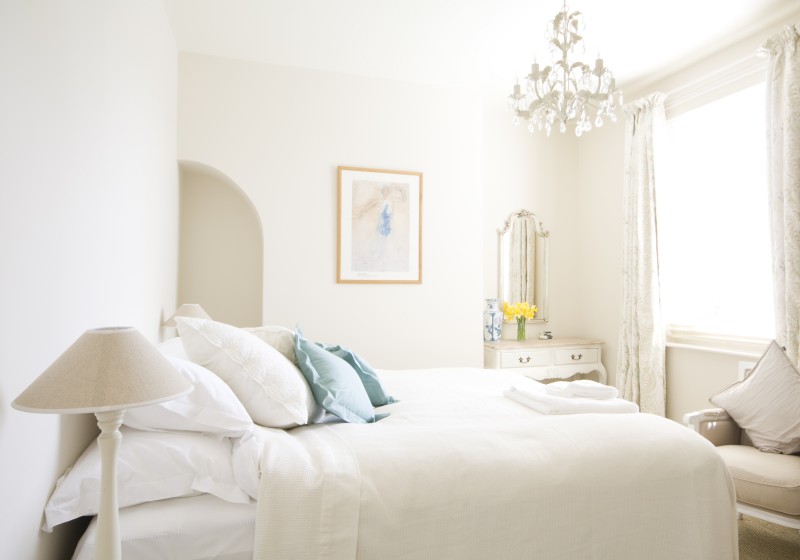 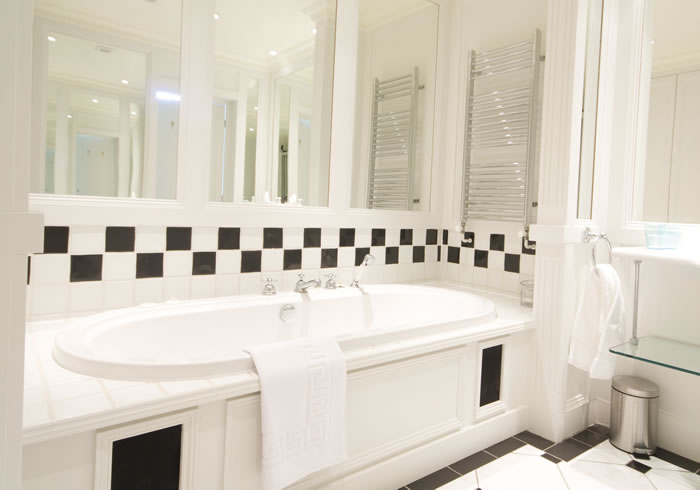 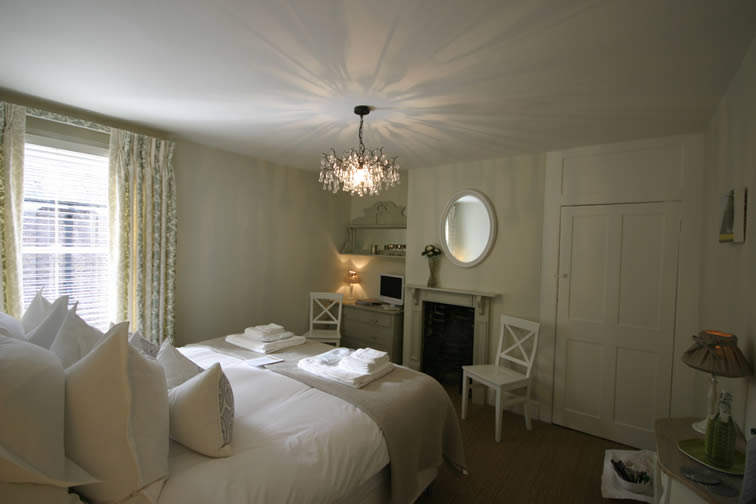 Stay at the finest B&B in Cambridge!

We look forward to welcoming you to Duke House Cambridge.

Please check availability and book online, or contact us for more information.

Accommodation in the Centre of Cambridge